WHO needs to be de-funded, not defended.

I had thought that the WHO’s tobacco division was a sideshow, but it appears the clowns have taken over the circus: 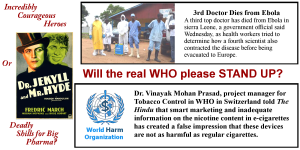 While the WHO Director-General, Margaret Chan, bangs on about Big Tobacco (and, in her own words, “Big Food, Big Soda and Big Alcohol”) the Ebola outbreak continues. Under Chan, the WHO has “repeatedly voted to emphasize noncommunicable diseases such as heart disease and cancer rather than infectious diseases” and funds have been distributed accordingly (read Crampton on this).

This week will therefore provide a perfect illustration of the corruption and inanity of the modern public health movement. While a virulent infectious disease spreads, representatives of the global organisation that was set up to deal with such crises are sat in a five star hotel in a rogue state at the taxpayers’ expense secretly discussing the evils of bubblegum flavourings in e-cigarette fluid.

So, the WHO still does spend the majority of its money on communicable diseases, if I interpret the Crampton link above correctly, but as funds are cut in general, newer funds seem to be allocated to non-communicable diseases, with a heavy concentration on lifestyle rather than inherited diseases. In other words, Puritanism.

I don’t know if the U.S. contributes to WHO but I know that when it’s time to fight ebola (which is NOW!!!!) I donated to instead.

One comment on “WHO needs to be de-funded, not defended.”

because cultivating the truth requires both seeding and weeding

Smile! You’re at the best WordPress.com site ever